Map of the Town of Beeston

Welcome to Beeston, town of adventure and excitement!

We hope your visit will be a long one and we would like to wish you luck in your endeavours to become an Adult God.

Beeston is relatively safe during the daylight hours, but then becomes very dangerous at night. Be especially wary of the six-foot tall Ratlings and the Hound. To see if its safe to wander around the lovely streets of this fair town you need to use WHEN and TIME. Between these two you will be able to see if it is dark or daytime.
Remember also that if you are not quite ready to be attacked by that Small Child or Drunk, you can always FLEE OUT or just FL O. This will take you away, "à la grande vitesse" by a single location. 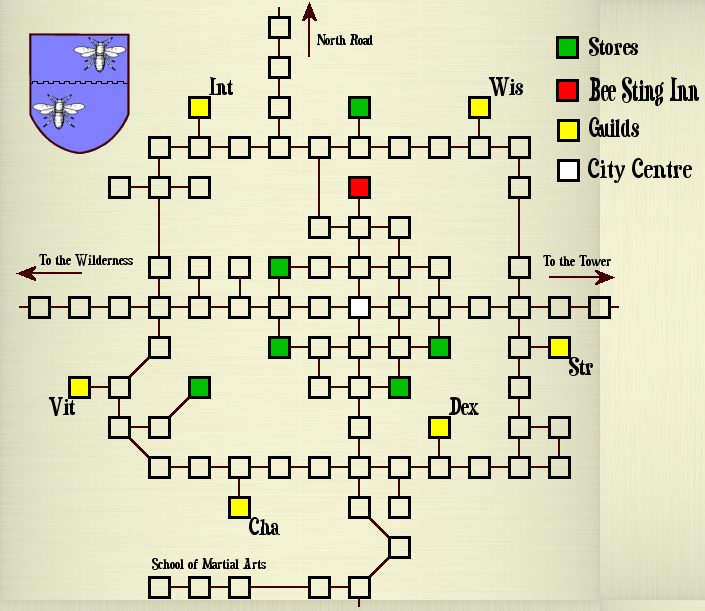 This is the meeting point where you can wait for other Adventurers, chat or mess about. There is a notice board that can be read here (READ NB) and written to (WRITE <What you want to write>). Please refrain from attacking players in here because the Inn has employed the services of Oswald the Troll Doorman (or Splatter). He is built like a brick wall and has the mental faculties to match. He WILL attack any Adventurer who starts a fight and unless you are an exceedingly high level, he will win. This also goes for any Inhabitant to the Town of Beeston (Storekeeper, Armourer, Weaponsmith, Pawnbroker or Alchemist).

The middle of the Town. There is a beautiful statue of Vick the coder standing here. It is said, that if you wait for long enough, the statue will mysteriously move and sometimes completely vanish!

Here you can buy potions and some of the more exotic items of equipment. For the magic users amongst you, he will sell you spellbooks when you become a skilled enough to use them. Be wary of buying those mushrooms off him!

The General store, as the name suggests, will sell you just about anything - for a price! This store is most frequented by Adventurers newly escaped from the Citadel, so they can sell their ill-gotten gains!

This Armoury is owned by a rather old dwarf with his younger apprentice doing the night shift. The old dwarf is the being you want to buy your equipment from, as the apprentice never seems to have a large selection.

The old man who runs this place has a nasty tendency to not give you back your equipment like a normal Pawnbroker does, so beware, only sell him the equipment you don't want to use anymore!

He is the man to go to if you want to buy a pointed, or indeed bludgeoning, weapon. His weapons are the finest in the town.

The market is open day and night. There is a money changer there so you can convert the cash you carry into a lighter coinage (if you have enough). Be careful there as there are some salacious characters wandering around the market area.

The Seekers of Knowledge Guild (Avatar 1)

This is the home of the master spellcasters or 'Wizzards'. From the outset, this group of people are considered weak, indeed at the lower levels even the baby hedgehogs can cause trouble! As this class progresses they gain in spell ability what they lack in physical prowess. This is still one of the hardest classes to push towards Greater Avatar.

Guild of the Truth Seekers (Avatar 2)

Clerics are the masters of healing. Their many spells include defensive and curative incantations. Though stronger than the Wizzards physically, this class is still relatively weak. This class may also cast curing spells on other players, it is up to the Cleric's own moral compass as to if they charge for the service!

Guild of the Charismatic (Avatar 3)

Strength wise, the Bard class is much stronger than the other two magic-user classes. The Bard is a jack of all trades, he's a competent spellcaster and can fight reasonably well. The Bard is the only magic user that could possibly survive in the Citadel unaided.

Guild of the Adroit (Avatar 4)

The Rogue class is keen-eyed and quick fingered! This class may steal from other Adventurers or the Inhabitants of Lomah. Physically a lot stronger than the Magic users, this class is useful when starting out!

Guild of the Tough (Avatar 5)

The Barbarian, or 'barbie' is the real grunt of the Adventurer classes. They have the ability to 'go berserk' and place all their attack power into fighting. This is dangerous as the Adventurer should be wearing really, really good armour before trying it!

Guild of the Vigorous (Avatar 6)

This class - the fighter - is the class that the Adult Gods recommend that new Adventurers start off training with. The fighter can take many blows and is less likely to be smeared across the wilderness by an overtly hostile baby hedgehog! This class can usually carry the most as well with a high strength score.

The School of Martial Arts

This school has three practice dummies to practice fighting with. Be careful which one you attack as its quite possible for you to be killed by a dummy! The straw one is the easiest to fight. You can use the dummies to work out the best armour/weapon combinations for yourself. Please be aware though, that the different Adventuring classes have different fighting capabilities at different levels - its worth checking out what's changed when you go up levels.

The Tower. What else can be said about this huge edifice on the other side of Beeston's moat? The Tower is a large castle along with numerous doors, passage ways and portcullises. A particular must-see is the Ravens. However, don't go too far east there as the guards tend to become a bit annoyed and might even attack you! Further east from the Tower is the Twin Peak mountain where high up there are confused animals and dangerous bits of rock. Another notable area in the tower is the White Tower where you will probably find yourself adventuring, so be wary of the witch there! The Tower is another place to be wary after dark as the Night Knights prowl about looking for Adventurer snacks!

Ah, the wilderness! Its full of weak creatures for you to get to know how to fight. At least, the north part of the wilderness is! Keep away from the Lioness and Ostriches in the sand dunes, they are especially lethal to new adventurers. Other than that, "go bash a bog!"® (BOG - Baby hedgehOG). The Bogs and Gogs will be the mainstay for you new adventurers, who are just starting out on the long road to Adult God.

The north road, unsurprisingly leads in a northerly direction. Here you will find the wonders of the forest and its inhabitants. Watch out! There is a dragon here along with other (cute and fluffy) horrors! If you keep traveling north, you will eventually reach the road to the Citadel.